1. Given the league expanded its schedule to 18 weeks this year, we can once again accurately say we’ve reached the midpoint of the regular season. But what do we really know? The NFC seems top-heavy but apparently houses five elite teams (Tampa Bay Buccaneers, Dallas Cowboys, Los Angeles Rams, Arizona Cardinals, Green Bay Packers) – maybe the five best outfits in the NFL. Meanwhile, the AFC is a mosh pit, the Las Vegas Raiders, Buffalo Bills and Cincinnati Bengals all losing in Week 9 to further pack the field. And yet, the AFC was 6-1 in interconference matchups Sunday, the Cowboys, Rams and Packers among the victims …

1a. The MVP conversation? In disarray with Tennessee Titans RB Derrick Henry likely out until at least January, Cardinals QB Kyler Murray (ankle) sitting out Sunday, Cowboys QB Dak Prescott struggling noticeably amid his return from a calf injury, and the Aaron Rodgers COVID-19 mess in Green Bay.

1b. Sunday was the first day in nearly a decade when four teams (Bills, Raiders, Cowboys, Packers) in first place as late as Week 9 lost to opponents with .500 or worse records.

1c. So what do we know? Almost nothing … other than the second half is wide open and should command our rapt attention.

3. All four teams in the AFC West are above .500 and have five wins, the Chargers and Raiders, both 5-3, just a tick ahead of the Kansas City Chiefs and Denver Broncos, both 5-4.

4. Green Bay is now 6-12-1 without Rodgers since he replaced Brett Favre as the starting quarterback in 2008.

6. Surely you’ve heard that cliché about New England treating the early portion of the regular season as its very own preseason petri dish? Welp. Look who’s won four of five after a 1-3 start is now a half-game out of the AFC East lead and projects into the AFC playoff field as the third wild card?

7. Meanwhile, Panthers QB Sam Darnold, formerly of the New York Jets, is still seeing ghosts against the Patriots – lofting three interceptions, including a pick-six, in a 24-6 defeat that dropped Carolina (4-5) out of wild-card position in the NFC.

8. What’s weirder, the notion of new Titans RB Adrian Peterson on “Dancing With the Stars” or the all-time great wearing No. 8 while playing in the AFC for the first time?

9. AD’s Tennessee debut (26 total yards and the 125th TD of his stellar career) occurred nearly 14 years to the day since he posted an NFL single-game 296 rushing yards for the Minnesota Vikings in 2007, his rookie season.

Nov. 11: Veterans Day is Thursday, and the NFL has long done a nice job spotlighting the military with its “Salute to Service” initiative. But the Cowboys really hit it out of the park Sunday, bringing back the red helmet stripe they wore in 1976, America’s bicentennial, as a nod to service members. Bravo to America’s Team, and may we all remember to thank a vet this week (and every week).

TB12. Missed you, Tom. A Brady-less pocket in any NFL schedule is simply less fun.

13.WR Odell Beckham is scheduled to hit waivers Monday at 4 p.m. ET as his highly disappointing tenure in Cleveland comes to a not-so-quiet conclusion. After that, the other 31 teams will have 24 hours to claim him, otherwise he becomes an unrestricted free agent. Be fascinating to see if one of the league’s poorer teams, which will have first crack at OBJ, rolls the dice on his talent, peccadilloes and remainder of his $14.5 million base salary for 2021.

13a. Though apparently the Raiders won’t be a suitor for Beckham after agreeing to sign another recently dumped receiver, DeSean Jackson.

13b. Yet maybe Minnesota might be, given some Vikings expressed support for OBJ as they warmed up in Baltimore on Sunday?

15. Next man up after an insanely eventful week in the NFL? How about second-year Browns WR Donovan Peoples-Jones, who provided the big-play quotient Beckham never did in 2021. Peoples-Jones’ 60-yard TD snatch Sunday ultimately proved decisive as Cleveland (5-4) crept back above .500.

16. Next man up after an insanely eventful week in the NFL? How about Broncos rookie Jonathon Cooper, who’s getting an opportunity to start in the wake of OLB Von Miller’s trade to the Rams and Bradley Chubb’s hitch on injured reserve. Sunday, Cooper sacked Prescott twice in Denver’s stunning 30-16 upset.

17. Next man up after an insanely eventful week in the NFL? How about Arizona RB James Conner, who churned out 173 total yards and a personal-best three TDs on a day when Murray and WR DeAndre Hopkins (hamstring) weren’t available. No matter, as Conner’s undermanned Cards thumped the San Francisco 49ers 31-17 to become the league’s first 8-1 team while reclaiming the No. 1 seed in the NFC.

18. Next man up after an insanely eventful week in the NFL? How about emergent Tennessee DL Jeffery Simmons (3 sacks), who outplayed Rams counterpart Aaron Donald on Sunday night while sparking a Titans defense that did the heavy lifting in LA during a 28-12 upset in the team’s first game without Henry.

COVID-19. Rodgers is the new poster boy, the most notable player sidelined by the virus this season. But the scourge continues, Vikings S Harrison Smith and C Garrett Bradbury, Cardinals WR A.J. Green, Bills QB Mitchell Trubisky and Broncos TE Noah Fant and QB Drew Lock also among the affected in the last week, when the New York Giants had to overcome a rash of false positives and everything that entailed.

20. Next man up after an insanely eventful week in the NFL? Green Bay Packers QB Jordan Love, the team’s first-round pick in 2020, looked every bit a de facto rookie at Arrowhead Stadium while filling in for Rodgers on Sunday. Love (19-for-34, 190 yards, TD, INT) couldn’t move the offense effectively against a 28th-ranked Chiefs defense and hardly resembled a guy potentially ready to take over for Rodgers in 2022 as the Pack fumbled away the top spot in the NFC 10 days after claiming it in Arizona.

21. Next man up after an insanely eventful week in the NFL? The Raiders didn’t have much luck Sunday replacing the deep speed of WR Henry Ruggs III – he’s facing five charges, including one count of driving under the influence resulting in death – in their 23-16 road loss to the Giants. Silver and Black receivers averaged 9.9 yards per catch in defeat, nearly three shy of the team’s seasonal average.

22. Next man up after an insanely eventful week in the NFL? Despite throwing for 249 yards and a pair of TDs in his first start since in two years, Trevor Siemian couldn’t keep the Saints rolling in the aftermath of QB Jameis Winston’s torn ACL. New Orleans didn’t score in the first half and its normally stout defense faltered against the Falcons.

23. As far as football goes, the Cowboys look forward to getting Prescott back in Week 10 now that he’s taken three weeks off – and Sunday counts after he and all of his teammates, at least those not named Micah Parsons, failed to show up against Denver.

24. Refunds should be issued as a matchup of 1-7 clubs (Dolphins, Texans) lived down to its billing, the teams combining for nine turnovers – most in a game in five years – nine sacks, 10 penalties and just 26 points. But, in the spirit of “next man up,” credit Miami QB2 Jacoby Brissett – he filled in again for injured starter Tua Tagovailoa (fractured finger) – for helping his team snap its seven-game losing streak. Houston has now dropped eight straight.

25. Lock of the week, right? Doesn’t get much more secure than Bills vs. Jaguars, right? Oops. Hopefully you didn’t go chalk in your survivor pool or at least get a mulligan.

25a. And who would have imagined not a single TD would be scored in Jacksonville’s 9-6 upset of Buffalo?

27. Of course, the weirdest nugget(s) from this contest? It marked the first time a player named Josh Allen (Jags) sacked a player named Josh Allen (Bills). For good measure, Allen, Jacksonville’s third-year pass rusher, also picked off Allen, Buffalo’s fourth-year QB – both were the seventh overall picks of their respective drafts – another NFL first among namesakes. And, yes, Allen recovered an Allen fumble, too.

27a. Per the NFL, it was the fourth time in league history a starting quarterback faced an opposing defender with the same name. The defensive player’s teams are now 4-0 in such matchups.

28. Will the Indianapolis Colts’ Jonathan Taylor emerge as the league’s next great back? It certainly appears he’s now on an All-Pro track given the injury to Derrick Henry, who won the NFL’s past two rushing crowns and still leads second-place Taylor – for now – in 2021. But Taylor, whose 1,169 yards on the ground as a rookie in 2020 were third-best league-wide, is definitely on the come. After steamrolling the New York Jets for 172 yards (on just 19 carries) and two TDs on Thursday, Taylor now has 821 this season. He’s also the first player in the league with six consecutive games including at least 100 yards from scrimmage and a rushing TD since Hall of Famer LaDainian Tomlinson in in 2006, his MVP year. Taylor also has the two longest runs (83 and 78 yards) in the NFL in 2021 and is the first this year with a pair of rushing TDs of at least 20 yards in a game.

29. Battle of Ohio? Not so much, the Beckham-less Cleveland Browns waxing the upstart Cincinnati Bengals 41-16. It’s taken Cincinnati all of two weeks to go from the AFC’s No. 1 projected playoff seed to out of the field entirely. Who Dey?

30. They had to overcome a 14-point second-half deficit against the Vikings, but the Ravens have now won 12 in a row against NFC teams, the longest interconference streak going.

31. And maybe Baltimore QB Lamar Jackson (266 yards and 3 TDs passing, 120 yards rushing) is back at the forefront of the MVP conversation. Sunday, he tied Michael Vick for most career 100-yard rushing games by a quarterback (10), and Jackson became the first quarterback to throw three TDs and rush for at least 100 yards twice. He’s also the only one to surpass 600 rushing yards in each of his first four seasons.

32. Mike White, White Mike, Jersey Mike, White Lightning, Magic Mike. It was fun while it lasted, Jets fans … and it never lasts long, because you all just can’t have nice things. 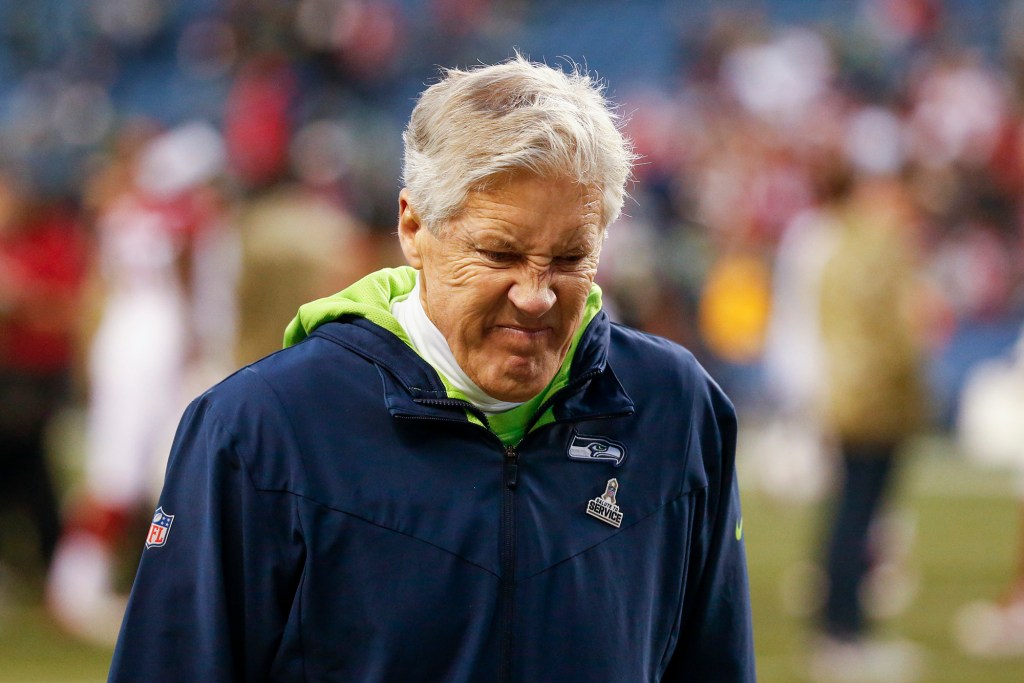 Seahawks are not enjoying their new bottom-dwelling status

The situation with covid worsened in a week in 13 regions Startup of the Week: Wafeer — helping Saudis spend wisely and save money