Roman Abramovich’s new £430 million superyacht has been spotted for the first time as it nears completion at a German shipyard.

The 460ft Solaris, equipped with a helipad and swimming pool, will soon undertake sea trials before the 54-year-old Chelsea owner sets sail in the summer.

The Russian billionaire’s eight-deck yacht has been fitted with 48 cabins and is able to sleep 36 guests, as well as 60 crew.

Despite its incredible size, Abramovich’s new vessel is actually smaller than the superyacht he already owns – the 533ft Eclipse.

As well as Solaris and Eclipse, the Russian is reported to have previously owned at least five other superyachts, including the 162ft Sussurro, the 377ft Luna, the 282ft Ecstasea, the 377ft Pelorus and the 371ft Le Grand Bleu. 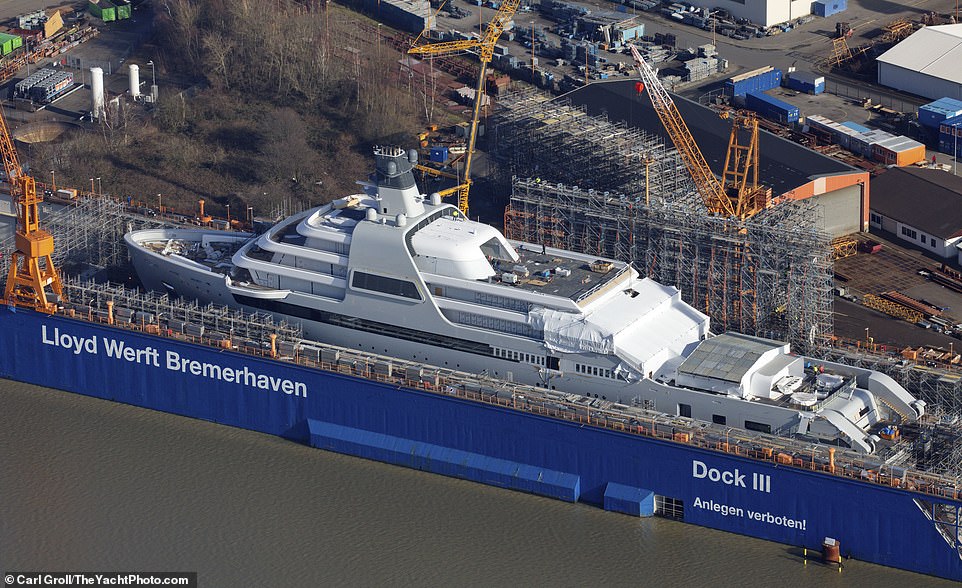 The colossal boat was pictured surrounded by scaffolding and cranes at the end of December as she neared completion at the Lloyd Werft shipyard in Bremerhaven, north of Bremen 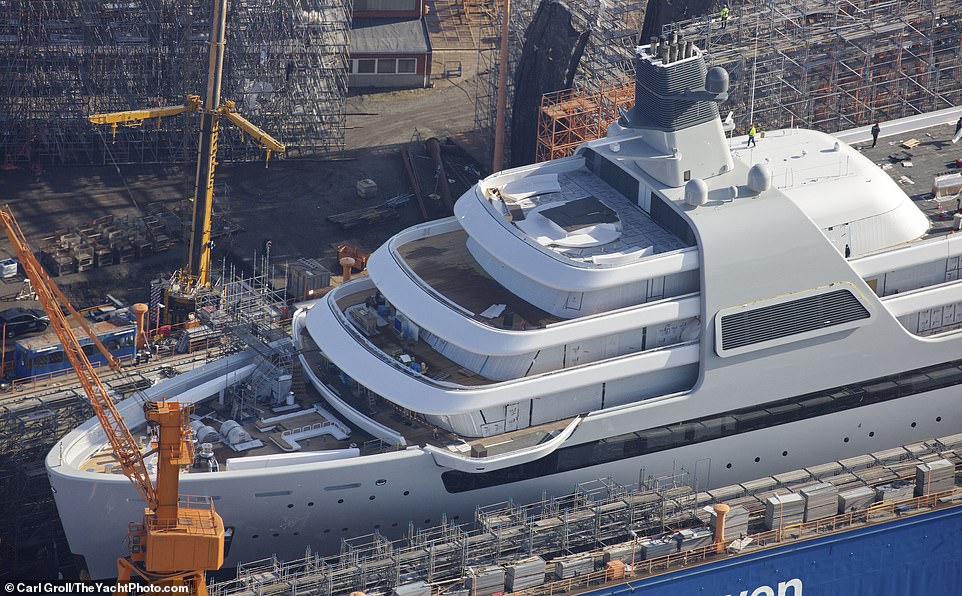 The 460ft Solaris, equipped with a helipad and swimming pool, will soon undertake sea trials before the 54-year-old Chelsea owner sets sail in the summer 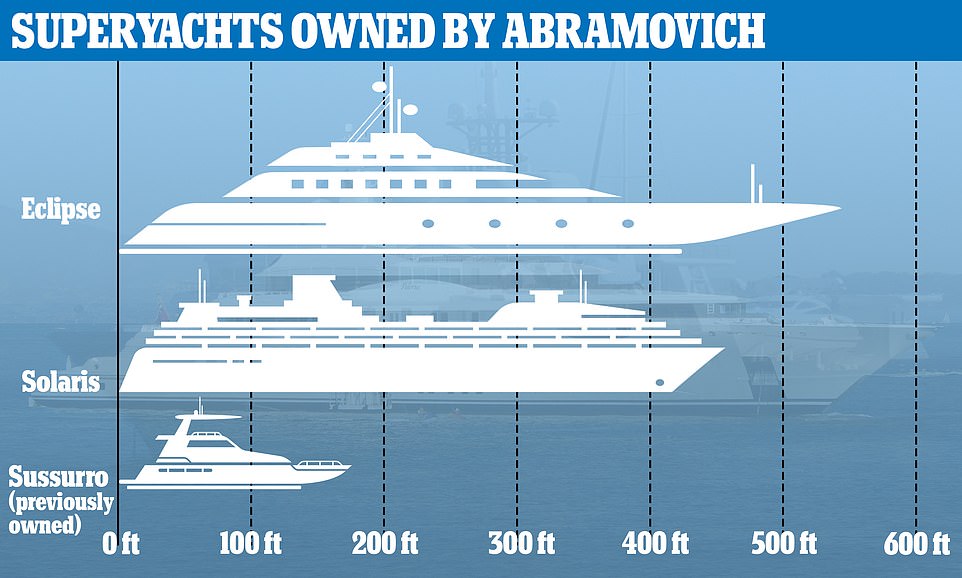 The Solaris will be Abramovich’s second superyacht and not as large as the Eclipse, a 533ft vessel. He has previously owned at least five other colossal yachts, the 162ft Sussurro the most recent to change hands in around 2017. 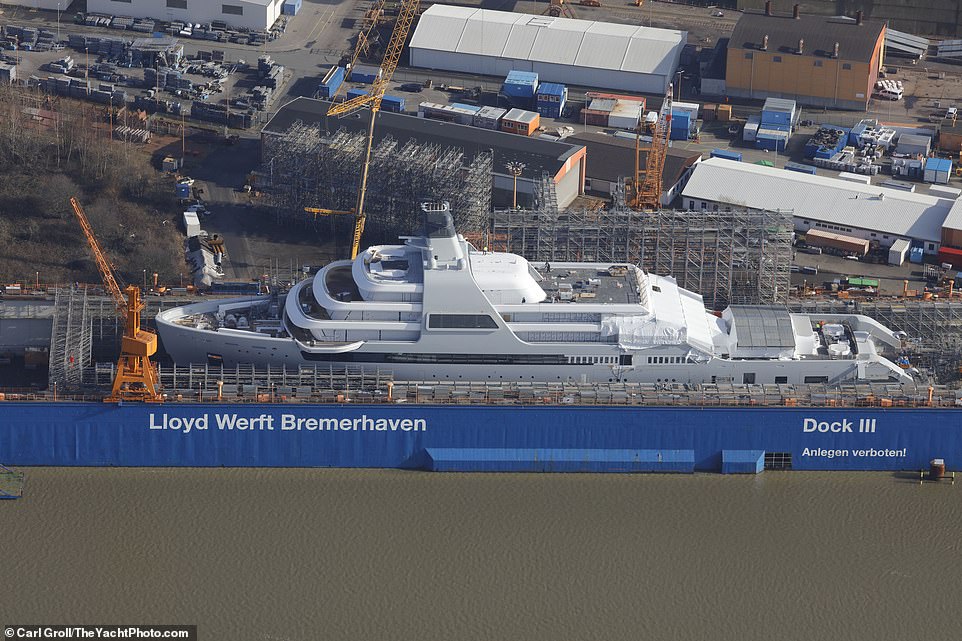 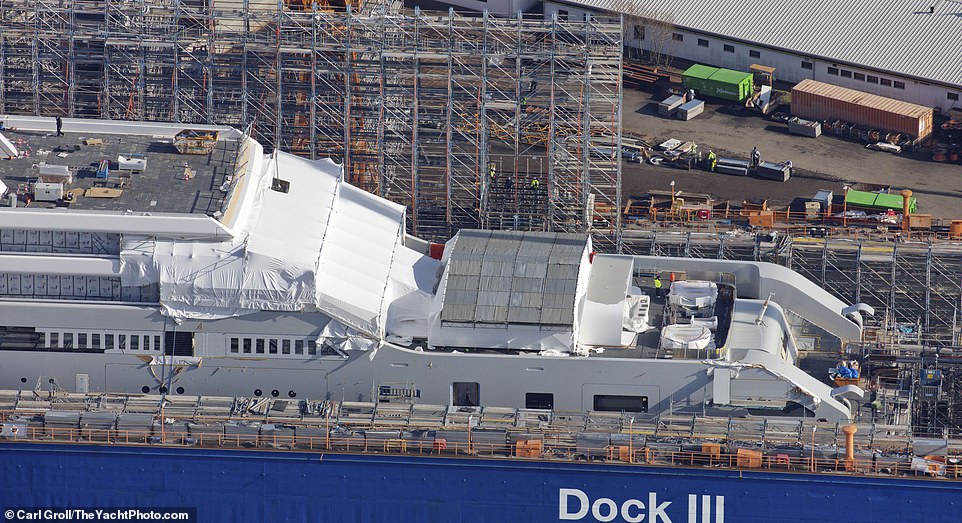 The yacht is covered in tarpaulin and materials as shop builders finish works on the massive boat at the end of December. She is expected to set sail in the summer 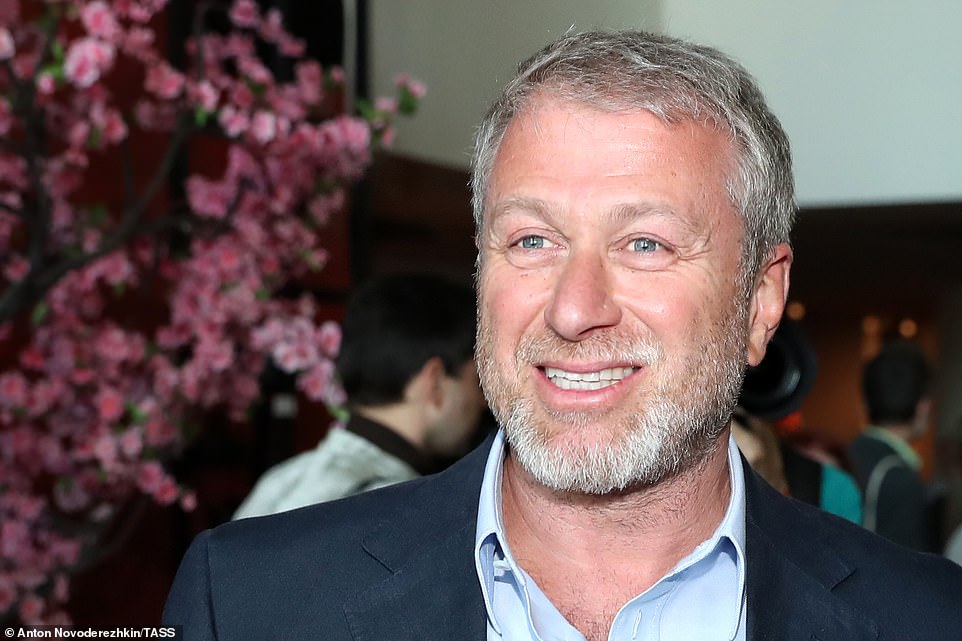 Abramovich at a theatre premier in Moscow in May, 2018

Solaris was pictured surrounded by scaffolding and cranes at the end of December as she neared completion at the Lloyd Werft shipyard in Bremerhaven, north of Bremen.

A source told The Sun: ‘This will be the yacht of the year when she is launched later this year.’

Solaris will have a top speed of 18 knots (20mph) and feature an outdoor beach club area, with a jacuzzi and spa to accompany the swimming pool.

Mr Abramovich is already the owner of a £540 million superyacht, Eclipse, which he uses for cruises around the French Riviera where he owns a villa in Antibes.

The 533ft yacht, at time of launch the largest privately owned superyacht in the world, is more than 70ft longer than Mr Abramovich’s new yacht.

The source added: ‘Details are being kept top secret but she will be a magnificent addition for the owner.

‘To give you an idea of the size of Solaris the yacht shed she is being built in is bigger and taller than Buckingham Palace so you have some idea of the dimensions.’

The billionaire has owned a series of other luxurious yachts before Solaris and Eclipse. Three of them – including the £110million Le Grand Bleu, the £274million Pelorus and the £276million Luna – measured more than 370ft.

The Luna and Le Grand Bleu are both ‘expedition’ class yachts, meaning they have very strong hulls which are capable of navigating through high seas while providing comfort to passengers in the most inhospitable climates.

Others have included the 282ft, £110million Ecstasea with a top speed of 25 knots and the smaller 162ft, £16million Sussurro.

But the Russian won’t be sailing to Britain anytime soon after his visa expired two years ago.

Mr Abramovich, who owns a £200 million property empire in London, became an Israeli citizen in 2018 after he announced that he had withdrawn his UK visa application.

It came amid heightened tensions between London and Moscow over the Salisbury Novichok attack.

Cabins: At least 24 guest cabins, but dozens more for the crew

Abramovich’s Eclipse yacht off the coast of Portofino, Italy, in September 2013. The yacht is valued at £540 million and is the largest which the Chelsea boss has owned 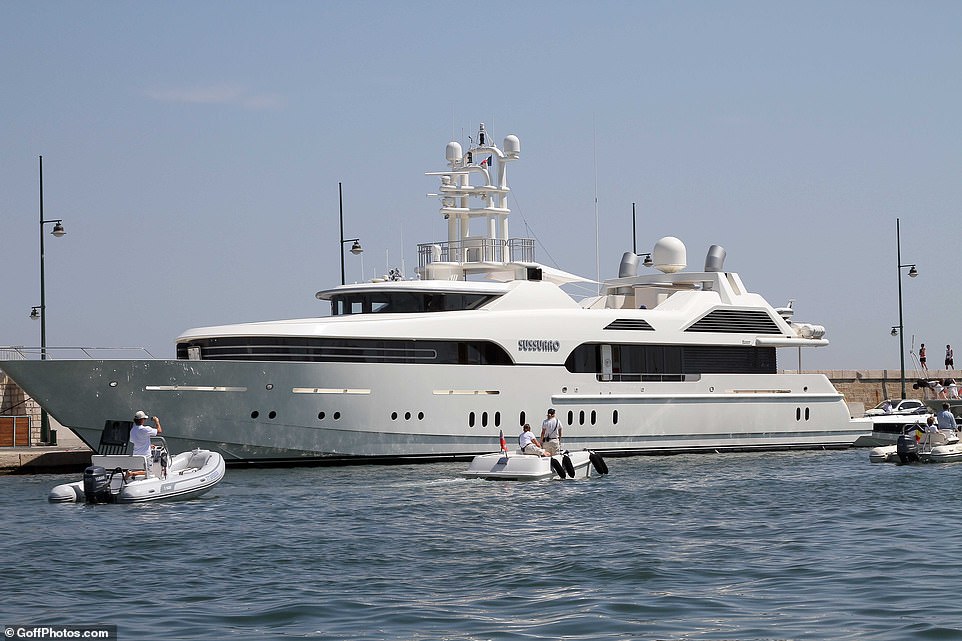 The yacht Sussurro is surrounded by sightseers in 2013. The 162ft vessel is valued at around £16 million and was let go by Abramovich in around 2017 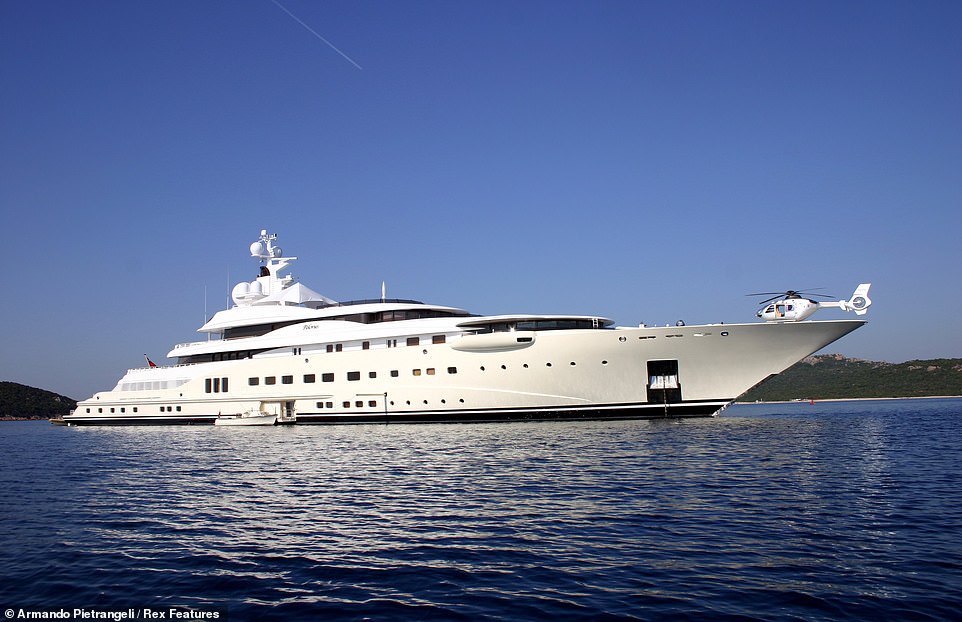 The Pelorus superyacht. The 377ft vessel has two helipads and a large swimming pool. It is valued at around £270 million 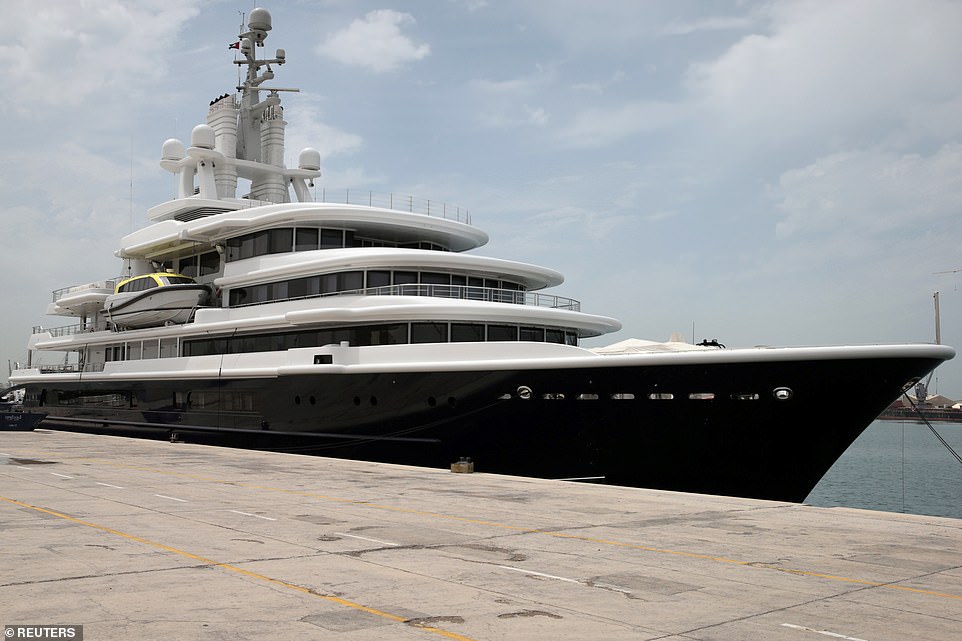 Luna at port in the United Arab Emirates in 2019. The £276 million vessel was delivered to Abramovich in 2010 and sold four years later to Azerbaijani billionaire Farkhad Akhmedov 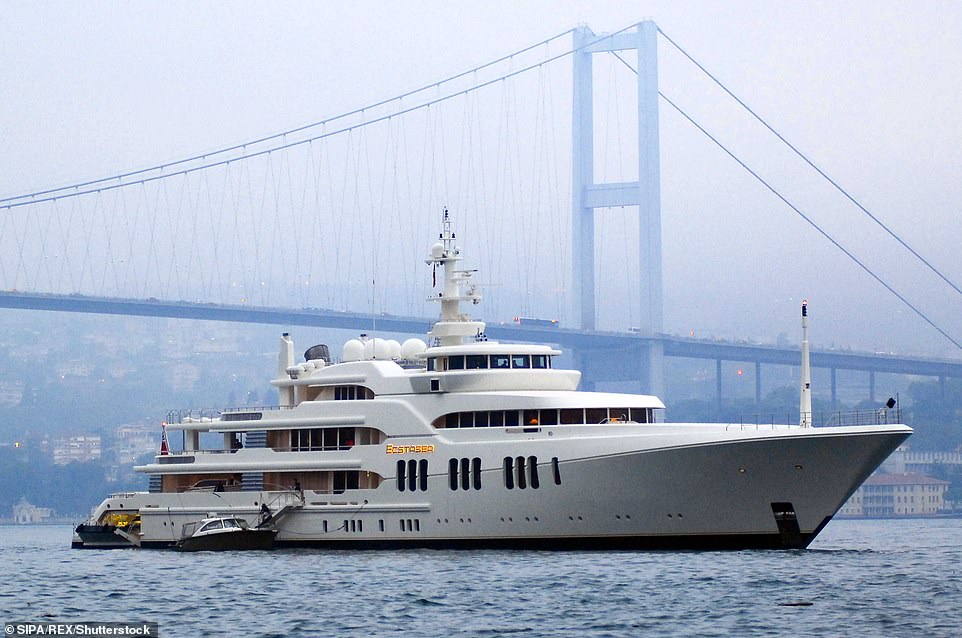 Abramovich’s former yacht Ecstasea sails through the Bosphorus, Istanbul, in 2010. The £110 million boat can accommodate 14 guests and 25 crew

In January, Russian opposition leader Alexei Navalny called for the freezing of Mr Abramovich’s assets over his poisoning and detention.

A representative of the 44-year-old anti-corruption campaigner accused the Chelsea owner of being associated with the Kremlin.

He is worth a reported £10 billion and has overseen years of lavish spending at Chelsea Football Club since taking over in 2003.

Under his ownership, the London club have won five Premier League titles, the Champions League and become one of world football’s most valuable clubs.

The Russian owns a 15-bedroom mansion in Kensington Palace Gardens on what is known as ‘billionaire’s row.’

He paid £90 million for the home which is now believed to be worth £125 million.

Mr Abramovich made his fortune by selling assets purchased from the state after the fall of the Soviet Union. 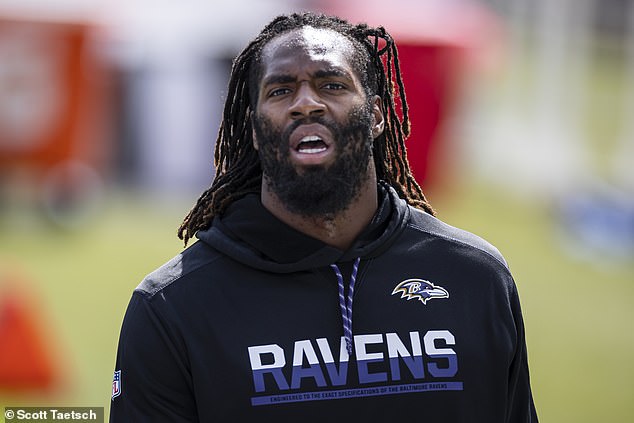 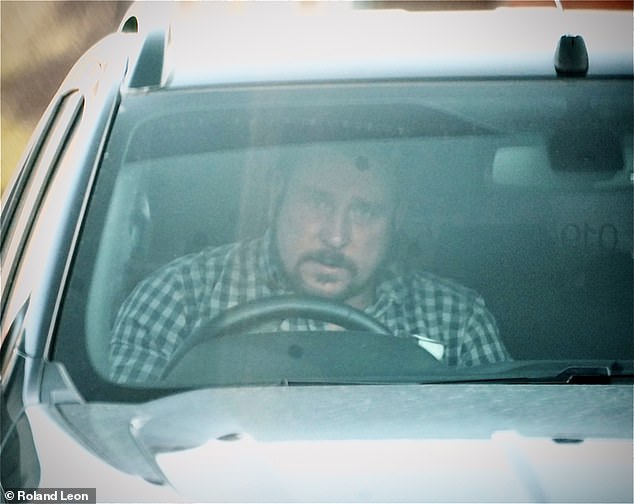 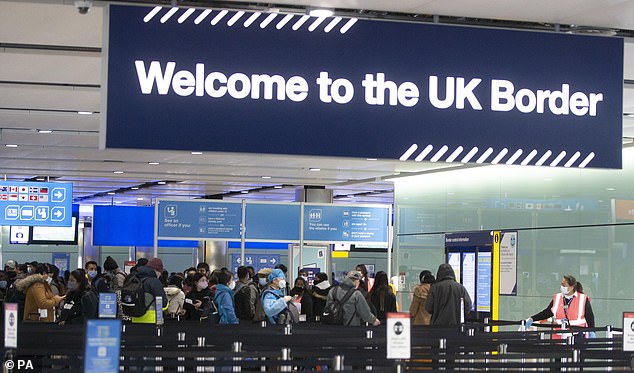 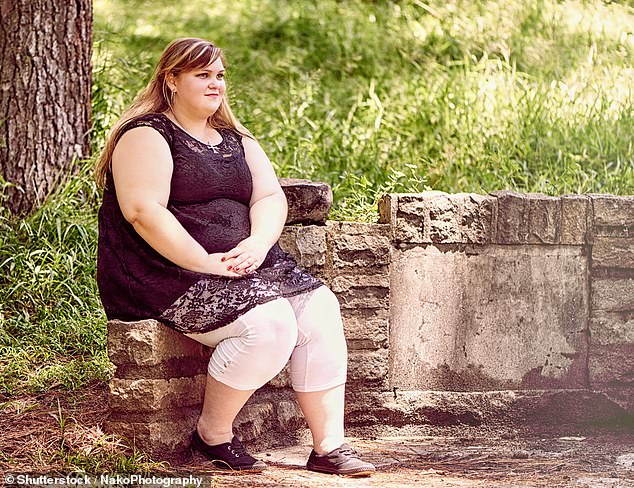