OAK PARK, Calif. — A story that was in the news recently has been fueling my nightmares: A woman in Santa Rosa found 92 rattlesnakes beneath her home.

Apparently it’s extremely unusual to find that many under a single property, and no one was injured by the poisonous snakes. But if you, like me, are among the majority of Americans terrified of snakes, those disclaimers provide little relief.

Snakes live in every county in California, and urban development encroaching into wilderness has increased how often we encounter them. There’s also evidence that wildlife have been further displaced by severe drought and wildfires.

“We’re seeing an uptick particularly in snake encounters because many of them have moved out of this degraded habitat,” Sabrina Ashjian, California state director for the Humane Society, told me.

I grew up in Thousand Oaks, a suburban community about 45 miles northwest of Los Angeles, where the boundary between nature and civilization has always been blurred. My high school once went on lockdown because a black bear was too close to campus.

The first time I saw a snake in the wild was when my family found two on our property — one trying to squeeze under our garage door and the other already curled up inside. Firefighters who removed the snakes informed us (to my everlasting horror) that the pair had been preparing to mate.

In my hometown and the rest of Ventura County, where much of the population lives close to open space, so many residents find snakes on their land that local firefighters train to handle such incidents. (Firefighters also deal with snakes in Los Angeles County, though in few other parts of the state or nation.)

Each Ventura County fire truck comes equipped with a snake catcher — essentially a long pole with tongs at one end — and new hires learn how to differentiate gopher snakes from rattlesnakes. The department receives about 1,000 snake calls a year, Capt. Robert Welsbie, a spokesman, told me.

But within Ventura County, there’s one place considered “the snake capital”: the hillside community of Oak Park, which is served by Station 36.

“If you work at Station 36, people would say, ‘How are all those snake calls?’” Welsbie told me. Snakes are so intertwined with the station’s identity that its patch features hissing rattlesnakes.

Oak Park, an upper-middle-class community of about 14,000 people, owes its snake bounty to geography — on two sides, it abuts acres of federally protected wilderness.

As I drove through Oak Park recently, I noticed deer crossing signs on major streets. The logo of a local shuttle line was a leaping mountain lion.

Housing tracts here backed up into open space, and some streets ended in trailheads leading up browned hills.

This is the truth about wealth in California: To succeed here often means living among wildlife, including snakes.

A few years ago, as a reporter at The Los Angeles Times, I shadowed a rattlesnake wrangler who has caught snakes in the backyards of Jamie Foxx, Ellen DeGeneres and Arnold Schwarzenegger.

Welsbie, who worked at Station 36 for six years, told me the biggest rattlesnake he ever saw was inside an Oak Park home. The snake, which was sitting on a window ledge, was at least four feet long, and fat.

The homeowners didn’t know how it entered. The last time they could remember leaving a door open had been 36 hours earlier.

“We were all shocked,” Welsbie told me. “To think that thing had been living inside that person’s house.”

If you read one story, make it this

The founder of the Hastings College of the Law masterminded the killings of hundreds of Native Americans 160 years ago.

The school, tribal members and alumni disagree over what to do about it now.

The smoky taste of wok hei, without a wok.

“I have visited over 500 of them so far. I find myself in places I’ve never been before (sometimes off the beaten path) even though I’ve traveled lots in my 70 years of living in California. At each place, I read about the significance and take in the geography, imagining what it was like back in the years of its existence.

I highly recommend this fun adventure. I’ve been doing this since my husband passed six years ago. I take photos and hope to make a photo book when I finish this project. Examples: where angry Native Americans killed a cattle rancher (you understand that conflict), Japanese internment camps, trails where mule teams carried borax, where Spanish explorers first landed on our shores, California’s first Capitol building, places of first industries, the standing adobes of the 1800s, Mark Twain’s little log cabin, etc. I find each location and story fascinating.”

Berkeley Bowl is a grocery store like no other, with rows of bulk containers of nuts, oats and dried fruits as well as the widest produce selection I’ve ever seen.

It’s the kind of place that inspires an unusual level of devotion among its customers.

So when a couple that met in a class at the University of California, Berkeley, started planning their wedding, they decided to take their engagement photos at — you guessed it — Berkeley Bowl.

Thanks for reading. I’ll be back tomorrow. — Soumya

P.S. Here’s today’s Mini Crossword, and a clue: “Handle” for picking up a pumpkin (4 letters).

Miles McKinley and Mariel Wamsley contributed to California Today. You can reach the team at [email protected].

Sign up here to get this newsletter in your inbox.

Mass demonstrations in the Sudanese capital, Khartoum, are heading towards the presidential palace 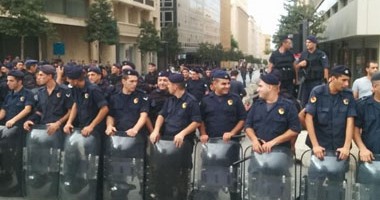 Lebanon: Roads blocked in the capital, Beirut, and a number of cities in protest against the deteriorating living conditions