There’s rarely a dull moment in the Caucasus, and now is no exception.

The ongoing attempt at normalization of ties between Armenia and Turkey is the region’s latest drama. Following Armenia’s loss to Azerbaijan in the 2020 Karabakh War, the process has started up again, with the two sides holding their first bilateral meeting on the subject on Friday.

The baggage on the Armenian side in particular needs little introduction — Turkey is the successor of the Ottoman Empire, which committed the Armenian genocide that Ankara continues to vehemently deny, to say nothing of Turkey’s support for Azerbaijan in the recent war. Nevertheless, the normalization process steams ahead, with hope for more progress than the abortive 2008 attempt.

For observers, the process is infuriatingly opaque. The impossibility of discerning true intentions, and the genuine willingness to reach compromise, both of participants and interested parties leaves outsiders guessing.

Armenia, for its part, seems to be the most straightforward participant in both its outlook and goals. Yerevan’s line has changed little in three decades — normalization without preconditions. This approach, reiterated repeatedly by Pashinyan in recent months, entails simply the opening of the long-closed border between the two as a basis for potential future improvements.

No topics like recognition or reparations for the genocide — a frequent demand from Armenia’s diaspora — or establishing full diplomatic relations are tied to this first step. For Yerevan, the opening of one of its long-sealed borders, would be achievement enough.

Two other relevant players have their own interests in the process, ones that could see them either back an accord or seek to sabotage it.

The first is Russia, Armenia’s erstwhile, though not particularly reliable, backer and treaty ally. Moscow has openly supported Turkish Armenian reconciliation, and also stands to gain from it.

Russia has repeatedly pushed for the reopening of the Soviet-era railway from Russia through Azerbaijan and Armenia to Turkey. The restoration of this route, which Russian President Vladimir Putin acquired additional support for from both Aliyev and Pashinyan in Sochi last month, would give Russia its first functional rail connection with Turkey since the Soviet collapse.

Conversely, however, the Kremlin has long benefited from, and been content with, the frozen status of the Karabakh conflict, which has kept Russia’s role as mediator center stage, not to mention a steady flow of arms sales. This influence, which only grew following the introduction of Russian peacekeepers to Karabakh in November 2020, gives the Kremlin a powerful incentive to keep the region divided and its inhabitants at each other’s throats.

The other major stakeholder in the process has an even greater impetus to prevent its success. Azerbaijan, and its president Ilham Aliyev, have been riding high since recapturing three-quarters of ethnic Armenian-held territory in and around Karabakh in the fall of 2020.

The Azerbaijani president has since directed his efforts toward attempting to force Yerevan, via military and economic pressure, into a capitulating settlement that would recognize Azerbaijan’s territorial integrity and admit the eventual cession of the remainder of Armenian Karabakh.

For Aliyev personally, the modus operandi of his near 20-year dictatorial rule has been demonizing Armenians as subhuman creatures of evil worthy of little more than extermination, while portraying his administration as the only force capable of defending Azerbaijan against this terror.

Baku has pressured Ankara to conduct its own normalization process in concert with Azerbaijan’s maximalist goals for Armenia. Some have suggested that Azerbaijan now has less reason to stand in the way of Armenian-Turkish normalization than it did in 2008, given its victory in 2020’s war. While this may be the case for the state itself, the Aliyev regime has ample interest in maintaining a tense standoff and maximum pressure on its eternal enemy.

The real wildcard is Turkey. Ankara’s diplomats have repeatedly changed tack in public remarks regarding normalizing relations with Armenia.

Early last year, a number of Erdogan advisors told media that Ankara was ready and willing to move forward with Yerevan, and that they had seen “positive signals” from Armenia following the war.

In recent months, however, that line has shifted. Turkey’s foreign minister and other diplomats have begun to state that Ankara will coordinate closely with Baku on the process and keep their allies in consultation for the duration of the talks. This shift in rhetoric followed a sharp uptick from Azerbaijan in military provocations against both Armenia and Karabakh, something that may or may not have been related to the process.

Following this, the recent renewed push for Armenia-Turkey talks came as something of a surprise, sparking speculation that Ankara wanted a diplomatic win of some sort in light of neverending crises with its European and US allies. In one article, anonymous Turkish sources even suggested the push came from U.S. President Joe Biden.

With the Turkish lira and economy in freefall in recent months, engendering better relations with Turkey’s Western partners as well as the economic opportunities (albeit limited) from opening the Armenian border could also weigh on Ankara’s calculus. But only Erdogan and his inner circle know if this will be enough to overcome their stated desire to continue to back Ankara’s allies in Baku.

The onus, then, falls squarely on Turkey in this round of prospective normalization. If Ankara opens its border with Armenia without preconditions — something today’s statement hinted at — then there will be a real possibility of doing so. If the potential spoiler role of Russia, and especially Azerbaijan, wins, however, it will just become the latest failed attempt to build towards peace in the Caucasus. 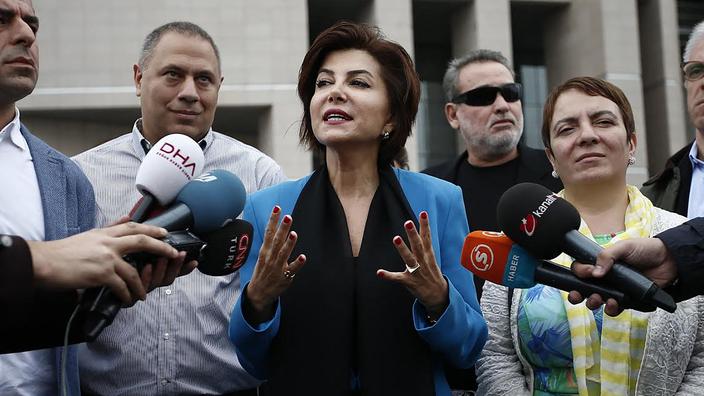 a journalist in pre-trial detention for “insulting the president”